We all know how congested our towns (such as Whitchurch) are for traffic, and that at times it can get quite worrying on a cycle unless you have nerves of steel, as some drivers will try and squeeze past when the space is not really there.
But ultimately everyone is doing the same – carrying out a journey, which should be possible without danger.

A new banner advertisement is being promoted by Hampshire County Council with what, on the face of it, seems a sensible message – drivers and cyclists are more alike than you think.

However there are some concerns about the deeper implications as the HCC 'banner' shows a person riding a bike and someone driving a car in very close proximity, something that to many can be frightening.
It also seems the HCC artwork shows the vehicles closer than in the Department for Transport Think! originals on their website guidelines. Does this HCC banner imply that leaving just a few inches between the vehicles is acceptable?
Is this something HCC are happy about?

It is not wholly clear who is overtaking who in the graphic but let's look at two very common aspects of vehicle movements:

ONE
PEOPLE IN CARS OVERTAKING PEOPLE ON BIKES

The Highway Code says:
Rule 163: give cyclists at least as much room as you would when overtaking a car.

This is accompanied by a picture: 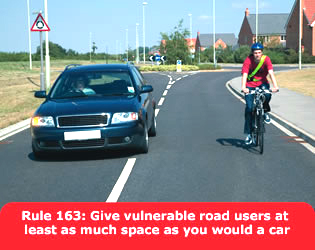 Does the new HCC 'endorsed' poster adhere to the principles within the Highway Code that vehicles should have a reasonable distance between them when passing?
Is the campaign material misguided? Over the sea in Ireland they have a different approach to road safety education that what seems to be the case in Hampshire.
There, they have launched an excellent short film on overtaking:

Let's assume that the driver in the HCC poster is stationary and the person cycling is passing by, as the graphic is not clear on this.

Again, does the few inches shown imply that that is a suitable distance?

Riders passing cars should be on the look out for many potential hazards, from dogs running out from behind vehicles to drivers setting off on their journey. One of the biggest hazards to those on cycles, especially when passing cars in urban areas, is the opening of the car door, which can be lethal.

However the onus must and does rightly remain with the driver not to open doors in the path of others, but regretably evidence is showing that they are taking less care and are doing so more often with disastrous results.

The Highway Code says:
Rule 239: you MUST ensure you do not hit anyone when you open your door.
Note that this is the law, not advice. 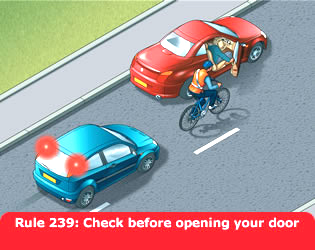 Is the HCC campaign implying that the acceptable distance to pass vehicles is just a few inches?
Is that sensible?

While I am sure the banner was created with good intentions, the design of the poster's graphics and the deeper message that it sends out, does little for road safety, and may even be harmful. That road safety 'experts' seem to endorse this for Hampshire, a County where casualty figures for the more vulnerable are rising, is worrying.

HCC have been recently promoting this banner through social networking, and intend running a campaign this Spring/Summer. They have been invited to participate on a cycle ride to see the issues in real life situations.

Will the offer be taken up?